The ‘Treatment Rooms’ is a privately owned house in West London whose exterior walls have been transformed by a collective of artists, who operate from it under the same name.  In this post, I explore a remarkable example of public art and the message it transmits about the commodification of art.

The Treatment Rooms, a collective of artists who operate from a terraced house in Chiswick, are embarked on a project to cover the entire outside walls of a three-storey terraced house in mosaic art. This is planned as a self-contained conceptual piece with strong political messages. Work has already been completed on the front wall, from east to west, in and around the porch, effectively completing the first of a planned three-tier project. 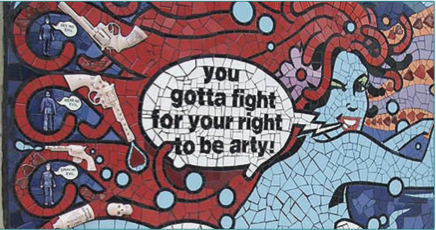 The subject matter of the different sections draws on a huge range of cultural references and associations, and is evolving as the work progresses.

One of the main motivating forces for doing this work is the collective’s desire to produce public art that is uncensored and unusual. In all, The Treatment Room’s projects, produced in collaboration with local authorities, there are strictures that do not allow overt political or social comment. At Chiswick, however, the aim is to include powerful political references.  To put the collective’s work in a social context, the intention is to express the reality of life today.  As well as this, the work will include historical references to the art and culture of the past, both to show the immense variety of different visual traditions, but also to highlight the differences, and the correspondences, with our present situation.

Nothing the artists have used in the design is a direct copy of earlier styles. Instead, they have used different styles as an inspiration. All designs are original with many different artists collaborating on the ideas and the working out of the finished designs. The Treatment Room collective has used recycled and donated tiles, both glass and ceramic. There are also some found objects and other materials incorporated into the murals.

The mosaics are very incongruous both in relation to their setting in Chiswick, and to the architecture of the house itself. The section around the front door, with its alchemical symbols of the four elements in Latin, its all-seeing one-eyed Mickey Mouse, its Tree of Life symbol, its Mayan Gods supporting the porch and ornate Indian decoration, transform the entrance into something mystical and challenging. 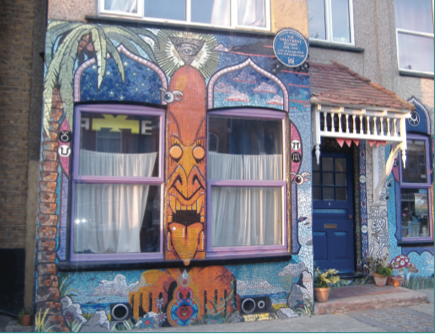 The walls around the windows to the left of the porch are decorated with Eastern inspired frames and are inlaid with ceramic discs associated with symbols used in alchemy and pagan ritual. Running the length and height is what can best be described as a surrealist tableau, featuring fly agaric mushrooms, flying eyeballs, a mischievous marriage of Mandrakes and a querulous caterpillar, based on the Lewis Carroll character, who bids the viewer to answer his simple question: “Who are you?”

To the right of the porch (the most recently completed section) is a Tiki-inspired island landscape that is either paradise or hell, depending how you look at it (palm trees, a giant orange totem pole, battleships, a pair of lovers and some UFOs). Above this scene explodes an illuminated eye: a sideways take on an English Heritage blue plaque.

The Treatment Rooms collective has clear aims for this extended work. “It is our intention that, as well as being a work of visual beauty, the house will be a vision of world cultures, allowing interpretations and possibilities for appreciation on many different levels, with a wealth of references and points of interest. It is envisioned that in years to come this building will become a place of interest for a very wide audience.” 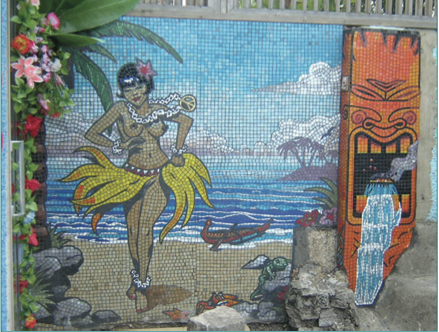 One of the most striking murals tells the story of an apparent miscarriage of justice in America. This has spawned a documentary film Treatment Rooms: The Luis Ramirez Story that is narrated by one of the collective’s artists, Baroness von Reichardt.

It tells the tale of a Hispanic boy being in the wrong place at the wrong time who, after six years on Death Row, was finally executed in October 2005. Whilst he was on Death Row at Polunsky Unit, Huntsville, Texas, Luis became the pen-pal of London mosaic artist Carrie Reichardt of the Treatment Rooms Artist Collective. After a six year relationship and only two days before Luis’ death by lethal injection, the Baroness visited Luis for the first time and vowed to construct a mural back in London, as a tribute to him and in remembrance of all victims of State execution. This promise was realised on the 18th June 2006 when the 22 by 6ft memorial mosaic was officially unveiled in Chiswick in the presence of Luis Ramirez’s family who had flown over from the USA specifically for the event.

Having completed the first main section of the front of the house, about three years work, Carrie Reichardt and the other artists involved in The Treatment Rooms are turning their attention to the rear of the house.

I have been writing about the UK tile and stone industry for over 25 years.

As well as the Founding Editor of Tile UK, I am the Editor of three tile-related publications in the UK: Tile & Stone Journal, The Specifier’s Guide to Ceramic Tile; Natural Stone; and TDY: Tile Design Yearbook.

I am also International Correspondent for Tile Today and Discovering Stone in Australia.

Looking for something specific?